The photo to the left was taken in the parking lot of the Swiftcurrent Motor Inn in the Many Glacier area of Glacier National Park.

Now I know why Montana is called 'Big Sky Country'. The land is vast and unobstructed by billboards, trees or skyscrapers, and the constellations and Milky Way are the only light around.

Back in April 2017, Waterton-Glacier International Peace Park announced they received the Gold Tier designation of the 'International Dark Sky' award. To achieve this designation, each park completed a significant number of lighting improvements to reduce light pollution, and to keep the park as natural as possible. Dark skies are integral not only for human health and enjoyment, but play an essential role in wildlife health. Unnatural light can disrupt migration, eating habits and other natural processes, putting wildlife at risk. "In a time when one third of the world's population can no longer see the Milky Way, protecting this resource is essential," Glacier Superintendent Jeff Mow said.

Since I live in a suburb, near a largely populated city, the Milky Way disappears above the glow of streetlights, buildings and car headlights. I have never seen a sky like this in my life and it's hard to believe it even exists, but it does. It is there where you can see past the glow or not. And all I can say is that it is utterly beautiful. 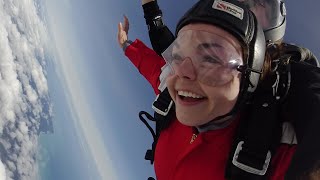 The Unreal Experience of Skydiving